30 Things to Avoid in Northern Areas of Pakistan 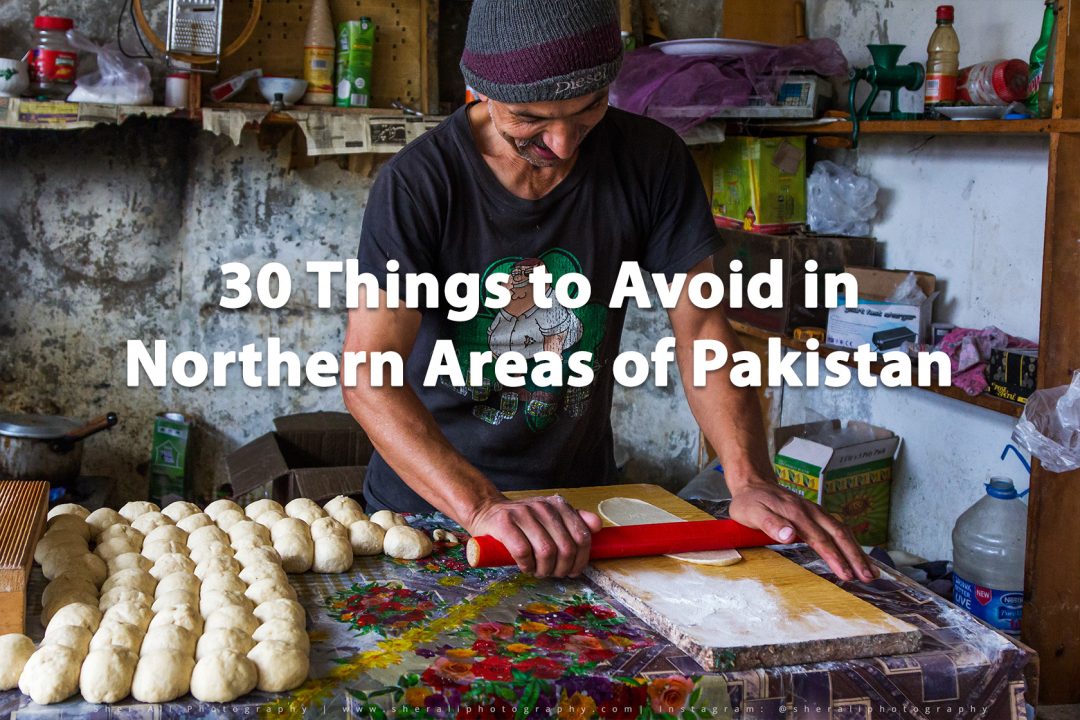 There are certain things about which a traveler should be careful and try to avoid if possible. Then there are things which a traveler shouldn’t not avoid to make the best out of his/her trip. Every country has its own culture and even within a country there can be different cultures. Pakistan is a culture rich country. Almost every province has its own culture and then within same province there are many different variations of cultures.

1- Do Not Take Photos of People Without their Consent

These are just 2 examples. Lately there has been concerns around Kalash valleys where people go and shoot portraits without their permission.

So the point is to respect the privacy of locals and seek their permission if you find that they need to be photographed. I put this one at the top because I believe this is one of the most important one among all the 30 things to avoid in northern areas of Pakistan.

2- Do Not Use Plastic Bags in Hunza

As of 2019, use of plastic is now banned in Hunza so do not use it otherwise you will fined. This doesn’t mean that you should litter every else. As a nature lover one should keep the environment clean whether in the cities or in the remote regions of northern areas of Pakistan.

3- Do Not Use Your Own Car to Cross Deosai

The road through Deosai National Park is off-road and only suitable for 4×4 vehicles. You may save few thousands by not hiring a local jeep but you will probably end up spending much more repairing the damages occurred to your car while crossing Deosai. And if your car breaks seriously then you will end up spending days there.

I have seen many guys buying used shoes at last minutes for treks like K2 base camp trek or Snowlake trek. This is not right because these are big adventurous treks and can be life threatening without proper gear. I have seen those used shoes giving up even on 1st day of the trek. I remember one of our team members buying used shoes at last minute from Skardu for Snowlake trek. Since you hit the mighty Biafo glacier on the very first day of the trek so that guys shoes gave up on the first day. He had kept the shoes which he carried from Islamabad so he trekked in those for the rest of the trek.

If you are lucky then you might get a good pair of used shoes but you need to test them before going out in the extreme wilderness. The best way to test shoes whether new or used is to do a small 2-3 days trek. One such trek I would highly recommend is the Dagri Bangla trek in the Galliyat region. Another quick 1 day but long trek is Pir Sohawa to Ghora Gali trek. This way you will be sure that the shoes you have bought are not only durable but also you feel comfortable wearing them.

5- Do Not Buy Polyester Sleeping Bags for Adventure Treks

The worst nights I have ever spent during any trekking expeditions were the ones I had spent on Baltoro Glacier during K2 base camp & Gondogoro La trek in 2014. During K2 base camp trek you get to sleep on glacier for at least 3-4 days. Back then I had a polyester sleeping bag and I felt so much cold at Gogo-2 and Concordia that I could hardly sleep. I would wake up after every 30 minutes due to the extreme cold.

Once I came back then I searched for alternate options and I came to know that that I can get a very good sleeping bag called TechnoWorld from Skardu. Though later I found out that we can get the same sleeping bag from Islamabad and Lahore as well but I got myself one from Skardu when we went there for Snowlake trek.

In excitement we often make mistakes which can be sometime life threatening. Many people riding on boats in Attabad lake take selfies and we all now that the craze to take unique photos sometimes pushes to extreme limits.

Attabad is a deep lake hence one should take full safety measures before getting up on the boat. Keep in mind that Attabad lake has swallowed big Redford treks when there was no tunnel and vehicles would be transported using ferries. So please always put on safety jacket and try not to be too adventurous.

7- Do Not Cross Hussaini Bridge When it is Crowded

Hussaini bridge in Gojal is fragile and cannot handle too much load. Hunza is becoming crowded day by day hence lots of people now get on to Hussaini bridge as most of the tourists consider it a must do thing in Hunza. It is not just Hussaini bridge but all such wooden bridges are very fragile and not built for groups to cross them at once.

8- Do Not Wear Western Clothes When Visiting Swat and Dir

I always say “respect the local cultures and traditions”. People in Swat and Dir do not like women to roam with western cloths especially in front of their houses. I have been told by locals in these areas that I should tell my female companions to cover their heads when passing through their village. I know some people would say that wear whatever makes you happy but by doing that you might invite unwanted trouble in some areas and ruin your trip. And it is not just Swat and Dir but every other area where the locals want you to respect their culture.

This doesn’t only apply to women but also to men. In Haramosh valley I was told by my guide to advise my male fellows not to come in shorts as locals don’t like outsiders coming to their area in such clothes and passing in front of their villages.

I myself have been guilty of trekking in trousers in Swat and Dir but lately I have started trekking in Shalwar Kameez and that’s what I did during my trek to Chukail meadows (June 2019) and Taip Banda (2020). These are simply things to avoid in northern areas and prevent unwanted trouble.

9- Do Not Skip Trying Local Food

One should always try local food in order to better understand the lifestyle of locals. Also eating food, which you east on in routine life in cities, doesn’t make sense. In different regions of northern areas you will get to eat different variety of dishes. My favourite is saag and makae ki roti which is easily available in Swat valley, Azad Kashmir and some parts of Gilgit Baltistan. I know Saag and Make is one of most famous traditional food in villages of lower areas from other provinces but I don’t get to eat that much in cities. You should try Chupshuru and Mamtu from Hunza valley. From Upper Chitral region or Upper Hunza valley you should try to eat meat of Yaak at least once in your life, of course if you are not vegan.

10- Do Not Skip Visiting Local Monuments

Do visit local monuments to get to know about locals’ history. Through guided tours you will get to know how their ancestors used to live and how they live in modern days. Often you will come to know about things which you wouldn’t belive in modern era. For example in old days there was no road link between Skardu and Hunza but the Mir of Hunza had married his wife from Skardu. Now if you take a guided tour of Altit and Baltit forts in Hunza then you will get to know that this marriage happened and how they used to travel from Hunza to Skardu and vice versa.

11- Do Not Use Chinese Camera Batteries at High Altitude

The first I had bought a cheap new camera battery for Canon 60D was during autumn trip to Rattigali lake in 2016. I did stargazing up there and the fresh Chinese battery didn’t even last for 100 shots. I learned my lesson from that trip and after that I have always bought branded new batteries.

Usually, from time to time I call couple of camera shops to check if someone has sold new camera gear to them. If they do then I ask them if they are willing to sell the battery to me. This has worked many times for me and I have always got branded camera batteries as good as new.

When you are at high altitude then due to extreme cold batteries deplete faster than normal conditions. So it leaving batteries in your camera body or even in your camera bag is not wise idea. What I do is that I take out all the batteries, put in a piece of cloth or a mini bag and then keep that mini bag inside my sleeping bag. You might think that this is cause inconvenience but that’s not the case. Since in sleeping bag you don’t change sides as freely as you do in a blanket so don’t rollover on the mini bag. Furthermore I try to keep them towards feet so you can do that too.

I don’t just do this for batteries but also for phones and power bank. It works and saves me crucial battery power on long trekking expeditions. Do give it a try someday and you will see the difference.

Yes, do not rely on iPhones for drone photography at high altitude. I am an iPhone user since the beginning era of touch phones. I love iPhones but the same iPhones have betrayed me when i needed them the most. I needed iPhone during my Rush lake trek in August 2018 to fly DJI Mavic Pro but it betrayed me. Before starting trekking from Hopper village I looked at the charging level in my iPhone, which was 90%, and then turned it off. Then next two days I kept the iPhone in my sleeping bag so that it wouldn’t drain charge due to extreme cold. But when I switched it on on 3rd day of trek to fly Mavic Pro then it showed 0% charge and immediately went off.

Luckily my trip mate Aamer bhae had DJI GO 4 app on his Android phone so I used his phone to fly the drone. I would be highly disappointed had I not been able to fly the drone back there. This was not the first case so I am not saying all this because of one such experience. Actually I had bought an Android phone before leaving for Rush lake but I forget the cable for my Android phone back at Hopper village. Even before I had a drone I would face the same issue with iPhones.

Batteries usually deplete fast in extreme cold conditions but they don’t deplete this much faster as iPhone’s battery does. If you are too reliable on iPhone like me then it is better to have a backup Android phone with the necessary apps Installed and do keep them up to date.

Travelers often give cash money to kids in the mountain areas which encourage begging among them. I am highly against giving money to kids in the mountain areas and I advise to you avoid this practice. If you really want to help the kids then please work with some local authentic organizations which would help the children in a better way. For example you can donate to a school which is run by donations or donate to an organization which works discourages child labor.

I will be adding more “things to avoid” to this article within next couple of weeks. So stay tuned… 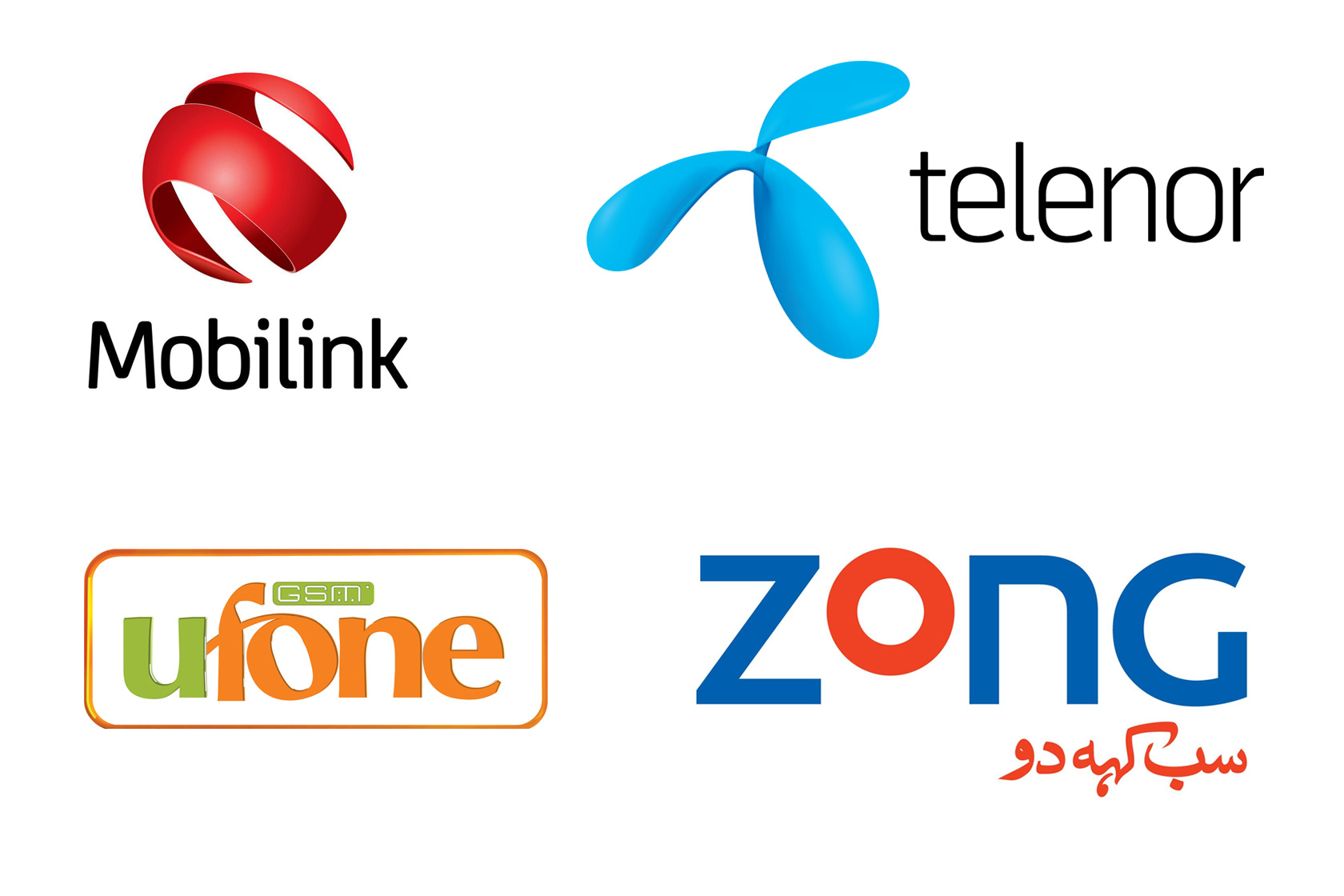 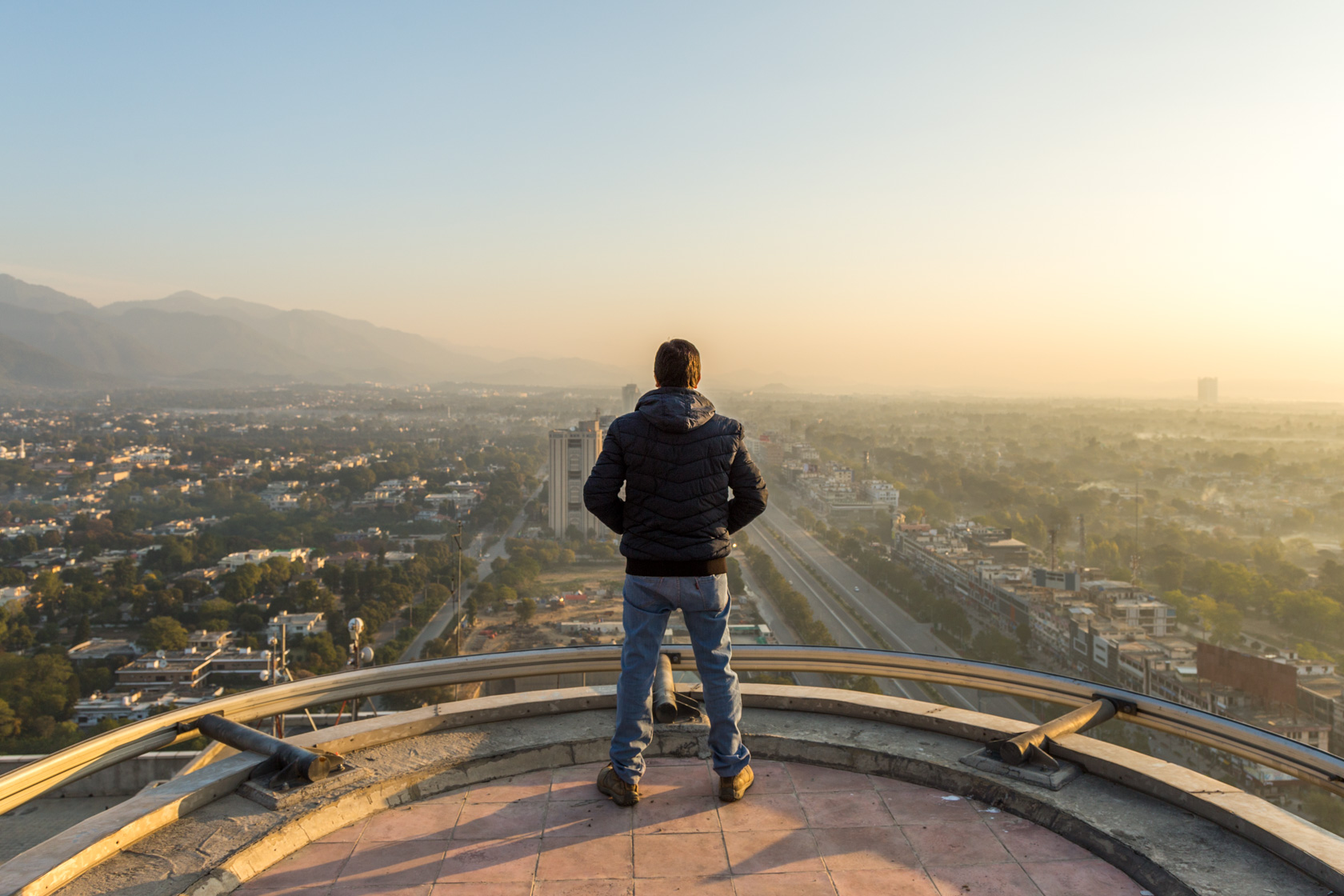 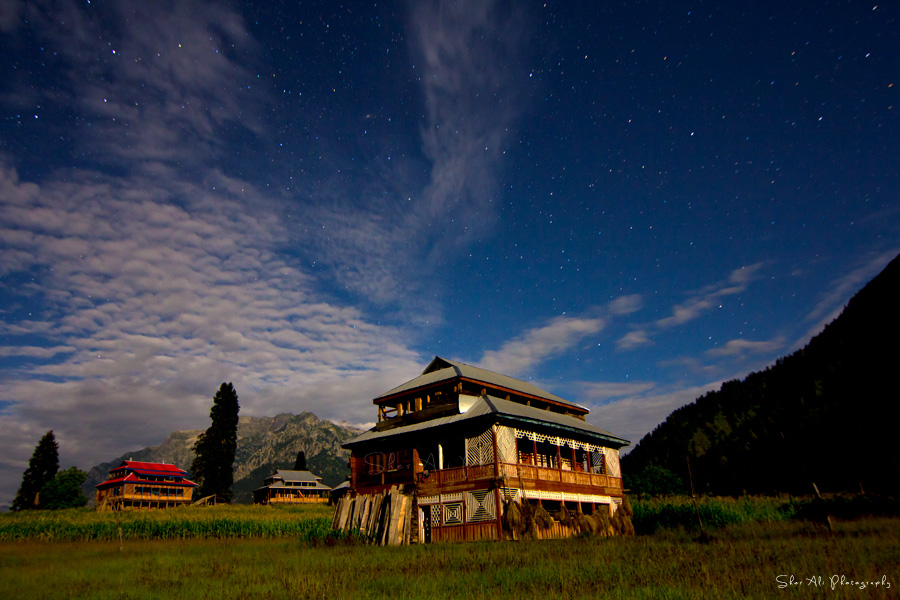